Police enforcement of the BC Supreme Court injunction order in the Fairy Creek Watershed area continued today on September 17, 2021, with ongoing efforts to keep the Granite Mainline Forest Service Road and other corridors free from any obstructions, devices and open for industry access.

Earlier in the day, while patrolling the forestry roads, police encountered a blockade of tree trunks and wood piles, with several other piles of logs in the middle of the road. A group of individuals with linked arms stood behind the larger wood blockade. Despite efforts to negotiate with the group, they refused to leave resulting in the arrest of 23 individuals, without incident, for breaching the injunction (contempt of court). All were processed and released. 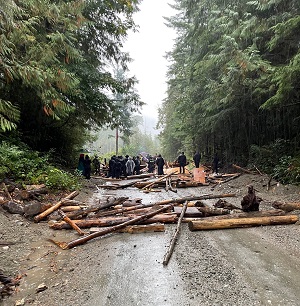 Larger image: piles of logs in the middle of the road 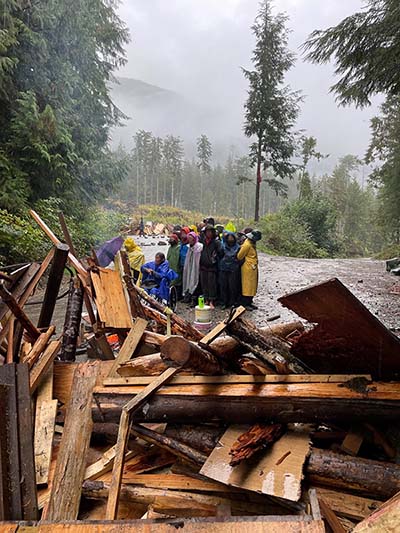 Enhanced roving proactive patrols will continue this evening and throughout the weekend.

Since enforcement began, the RCMP have arrested 1043 individuals; 110 of whom were previously arrested with a combined total of 261 times. Of the total arrested, 814 were for breaching the injunction (contempt of court), 196 were for obstruction, 16 were for mischief, 6 were for breaching their release conditions, 6 were for assaulting a police officer, 2 were for failing to comply with a court order, 1 for counselling to resist arrest, 1 for causing a disturbance, and 1 Immigration Act.

All news releases on the Fairy Creek Watershed police enforcement issued to date can be found on the Lake Cowichan RCMP Detachment website.