As January comes to a close we also wrap up Crime Stoppers Month, and there is no better way to do that than to present the awards for Crime Stoppers’ Member of the Year and Watch of the Year.

This year the Northern B.C. Crime Stoppers celebrated a record-breaking year in Prince George with 230 tips forwarded to the Prince George RCMP. From those tips, police made seven arrests and recovered $63,700 in property and drugs. The volunteer board of directors reviews the tips that police have investigated and recognizes one Watch and one Officer from the detachment who made extra efforts to support the Crime Stoppers program. This year marks the eighth annual presentation of these awards.

The Officer of the Year award goes to Cst. Ryan Underhill. Cst. Underhill graduated from the RCMP training academy, Depot, in 2008. He served his first post in Ladysmith for three and a half years before transferring to Prince George Detachment where he has served for over nine years. Cst. Underhill has worked in a variety of units with the Prince George RCMP and he enjoys working in a team environment where he can investigate drug related offences. 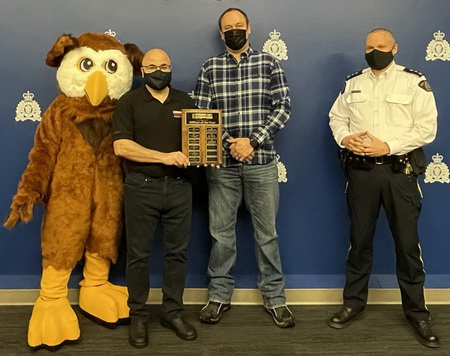 I am honoured to be the recipient of this award and thank the Crime Stoppers board for their consideration, says Cst. Ryan Underhill. Crime Stoppers is a great program that gives the public an anonymous way to provide information to the police, so that we can use this information to make arrests and seize drugs, which makes Prince George a safer place.

The Prince George Detachment’s General Duty D Watch Unit is the 2020 Watch of the Year. Staff Sergeant Chris Riddle is the Watch Commander for this unit, which is comprised of 12 general duty Constables, two Corporals, a Sergeant and a Staff Sergeant. Through Staff Sergeant Riddle’s leadership, D Watch has utilized vital information provided through the Crime Stoppers program to seek out and arrest those who are doing the most harm in our community. Their efforts have made a significant impact on both the drug trade and property crime in Prince George and surrounding areas throughout 2020. 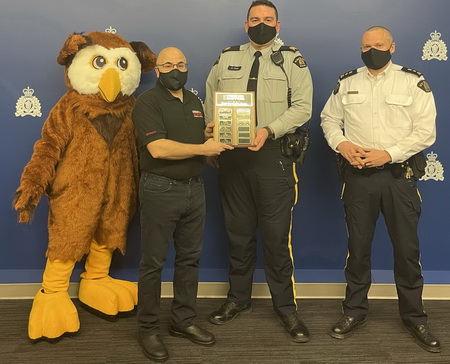 Crime Stoppers is a partnership between the community, law enforcement and media. The program empowers regular people to fight back against crime in our community by creating awareness and providing an anonymous way for residents to report suspicious or criminal activity. Its police partners then use those anonymous reports to further their investigations.

The Board would also like to thank the citizens of Prince George and surrounding areas for providing a record amount of TIPS with vital information that has led to an increased number of arrests and seizures in 2020.

There are two ways to submit a TIP anonymously to the Northern B.C. Crime Stoppers, 24 hours a day, 365 days a year: