Over the past month, members of Prince George RCMP’s Street Crew Unit conducted an investigation into drug trafficking in Prince George.

Police arrested two men in the course of the investigation, seizing over 70 grams of suspected fentanyl, cash and drug trafficking paraphernalia off one of the suspects. Both of the men are well known to police for their ties to the illicit drug trade in Prince George.

Police executed two Controlled Drug and Substance Act warrants, one at a residence on the 2000 block of Pine Street, the other at an apartment building on the 1700 block of 17th Ave, where investigators seized approximately 800 grams of suspected fentanyl, smaller amounts of suspected cocaine and methamphetamine, a large number of Dilaudid pills and a firearm. 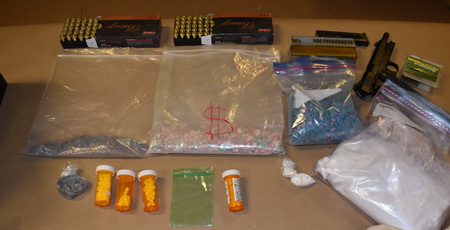 The amount of fentanyl seized is enough to supply approximately 8,700 single doses of the drug, with the approximate street value in Prince George of $391,000.

This is a very significant seizure of drugs, which likely accounted for a large portion of Prince George’s illicit drug supply. Police believe this was used to target those frequenting the downtown area, states Cpl. Jennifer Cooper, media spokesperson for the Prince George RCMP.

The suspects were released pending the results of the full investigation.

If you have any information about this or any other criminal offence, please contact the Prince George RCMP at (250)561-3300 or anonymously contact Crime Stoppers at 1(800)222-8477 or online at www.northernbccrimestoppers.ca (English only). You do not have to reveal your identity to Crime Stoppers. If you provide information that leads to an arrest or recovery of stolen property, you could be eligible for a cash reward.