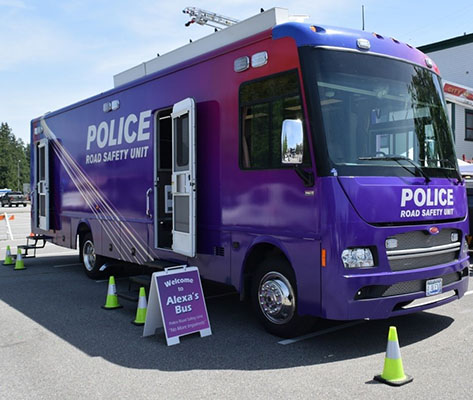 The Alexa’s Bus program was born from a tragedy which led to a collaborative effort between government, police, communities and the Middelaer family whose 4 year old daughter Alexa was killed by an impaired driver as she stood beside a road feeding a horse in May, 2008.

In 2010, the Middelaer’s (Laurel and Michael) challenged the RCMP, Municipal Police Agencies, and the Ministry of the Attorney General for British Columbia to reduce the number of deaths caused by alcohol impaired driving by 35 per cent by the end of 2013, the year Alexa would have turned 10-years old. They began a fundraising campaign to purchase a state-of-the-art Mobile Road Safety Unit (MRSU), known as "Alexa's Bus," designed to provide all police forces in BC a platform for alcohol and drug-impaired driving investigations.

The Alexa’s Bus program is the first of its kind in British Columbia and is one of several BC Highway Patrol programs managed by the province’s Integrated Road Safety Unit. Alexa’s Bus is a fully contained police detachment on wheels that deploys to events throughout the province and has four important purposes:

Impaired driving is still one of the leading causes of fatal collisions in BC. In the years since the Middelaer’s issued their challenge, police in BC have removed nearly 100,000 impaired drivers from our roads.

Police throughout the province continue to deliver on their promise to Alexa’s family by removing impaired drivers from our roads and reducing the number of impaired driving fatalities in BC. Every police officer who removes 12 or more impaired drivers a year from the road joins Alexa’s Team.